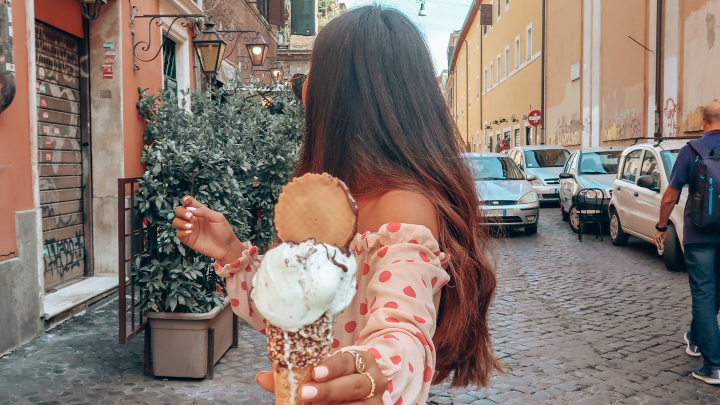 In September, I finally got the chance to cross a particular European city off my bucket list. A city full of history, ancient ruins and pasta for starters, yep, you guessed it – Rome.

I’ve had a few requests over on instagram as to where to eat in Rome and after compiling a very extensive map before we went there, here’s a few of the places we had a chance to try and that I would recommend. 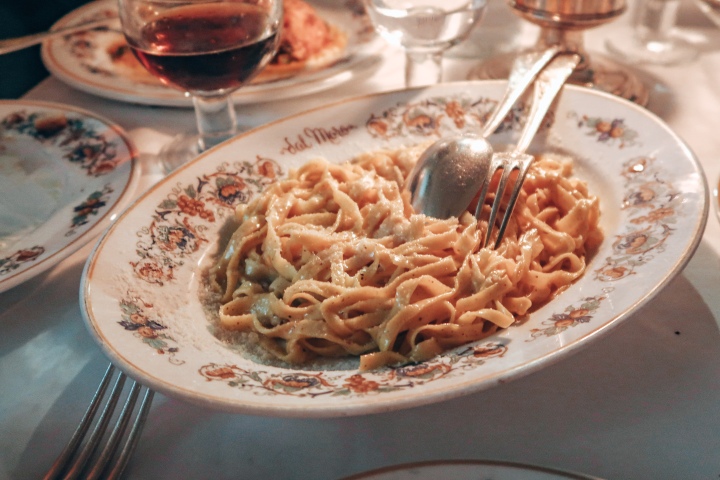 This was a recommendation from a Rome local and I’ll be honest it wasn’t our first choice that night but the taste of that truffle pasta really turned me from a tired baby to a very excited then very full baby. That truffle really coated those pasta strands and wasn’t too oily. Order a burrata and use it to soak up the truffle sauce for an extra slice of heaven. 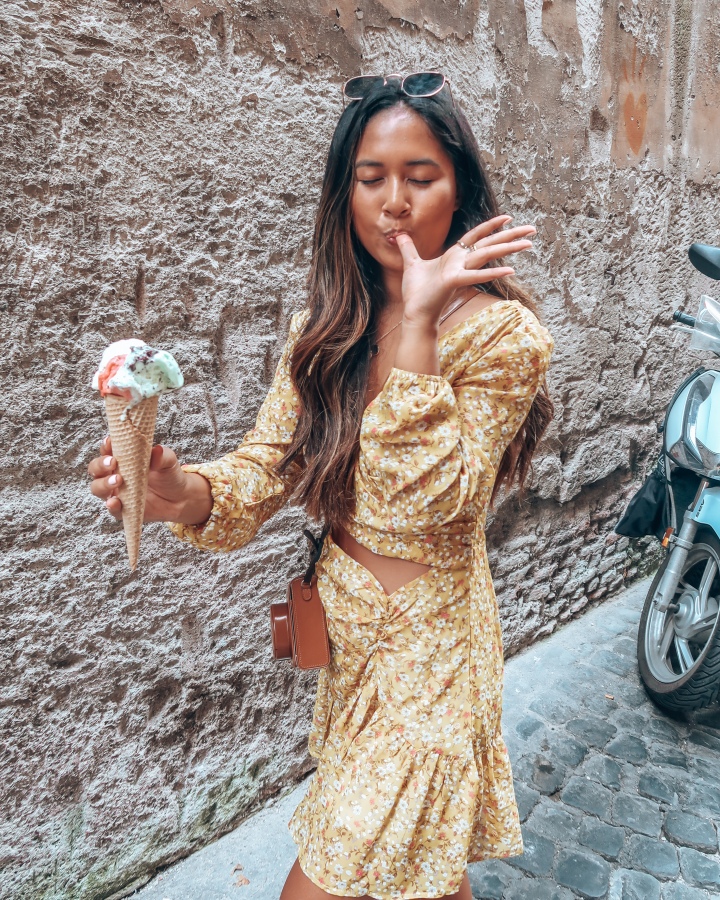 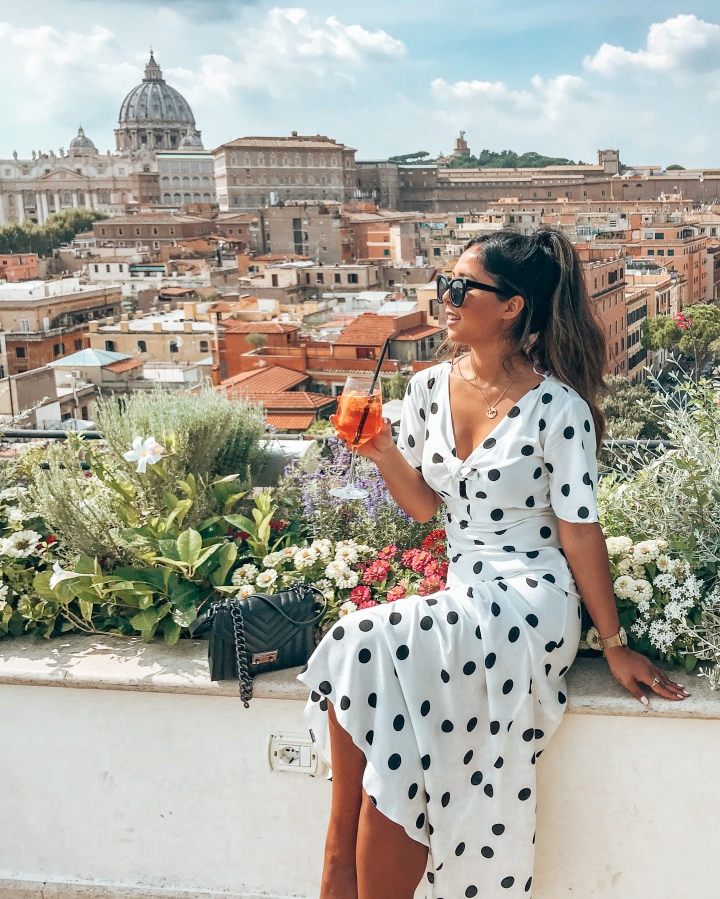 Opening times: 10am – 1am | Book: No for drinks, I would book for restaurant

Les Etoiles on the top floor of Atlante Hotel offers a 360 view of Rome and the perfect spot to enjoy an aperol after walking around Vatican City. We only had drinks here but there’s also the usual lunch options should you want a bite but we saved ourselves for food in Trastevere instead. 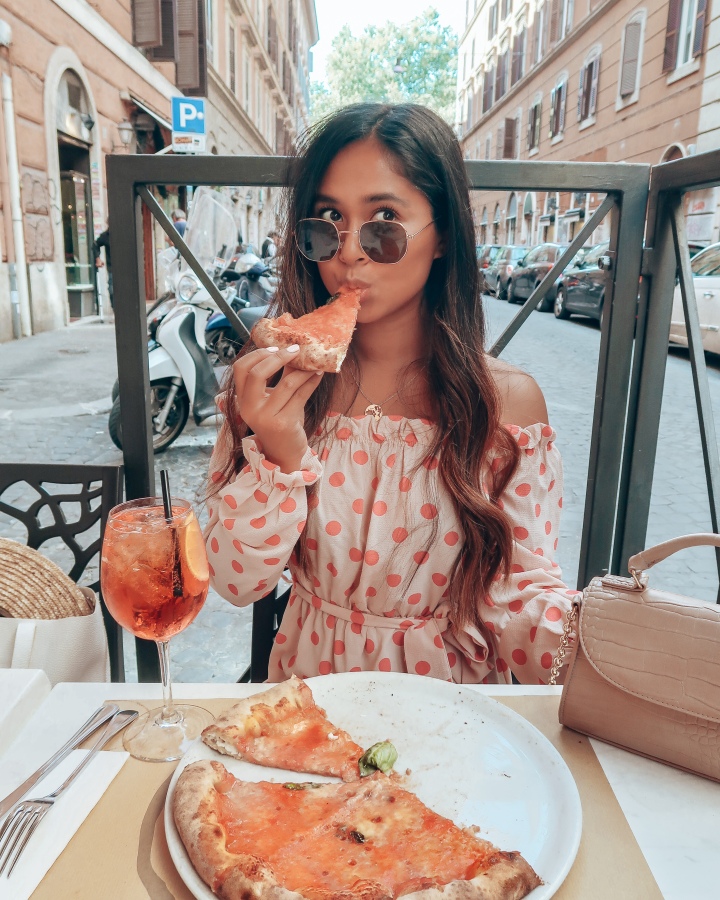 If you love pizza, which lets be honest you probably do, this place is a must visit. Voted in the top five pizza places in Trastevere on trip advisor, here’s a place you’ll find a classy stuff crust and just really the softest doughiest pizza to ever grace my sweet mouth. 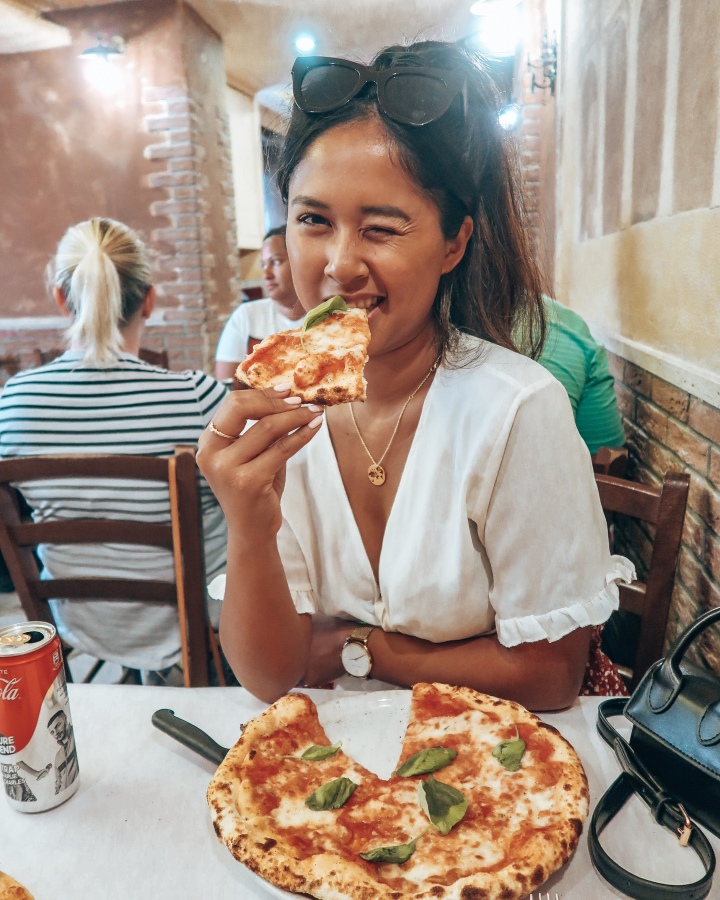 If you love pizza and love choice then you will love Dar Poeta. This little gem down one of the side streets of Trastevere has an extensive pizza menu and a very friendly team. I 100% recommend for great value and great circles of dough. 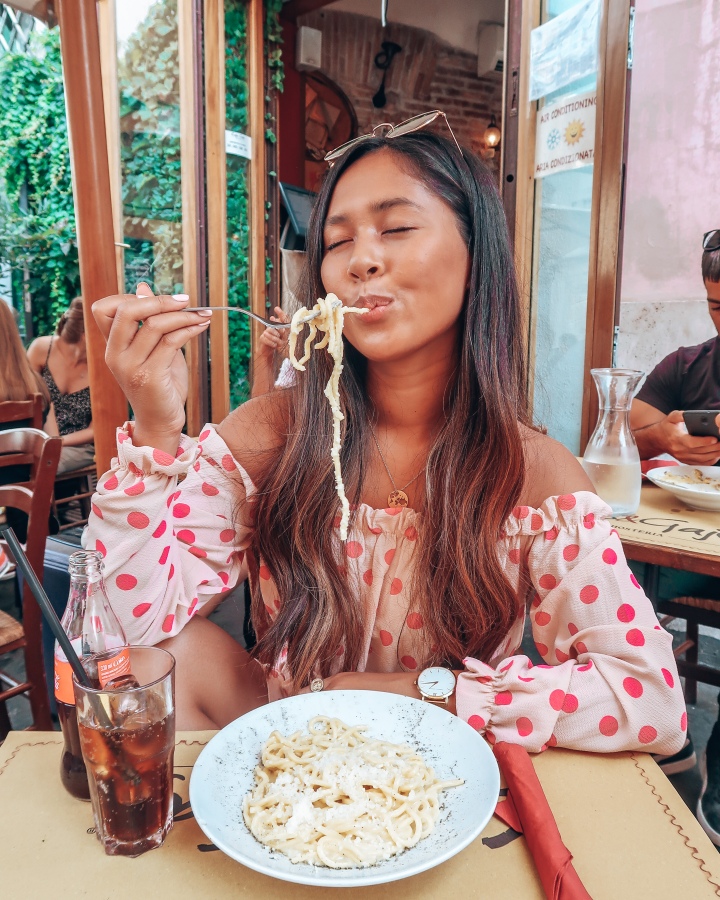 Slightly unassuming but ranked 121 out of 10,000+ restaurants in Rome, you know you are in for a fantastic table of food. Sadly we had already stuffed two pizzas and gelato in the two hours we had free before our flight but I was desperate for a pasta pic so I did some research and ordered their famous tonarello pasta aka a cheese lovers dream. Simply its cheese and black pepper but wow, whatever love they’re putting in there, I am feeling. 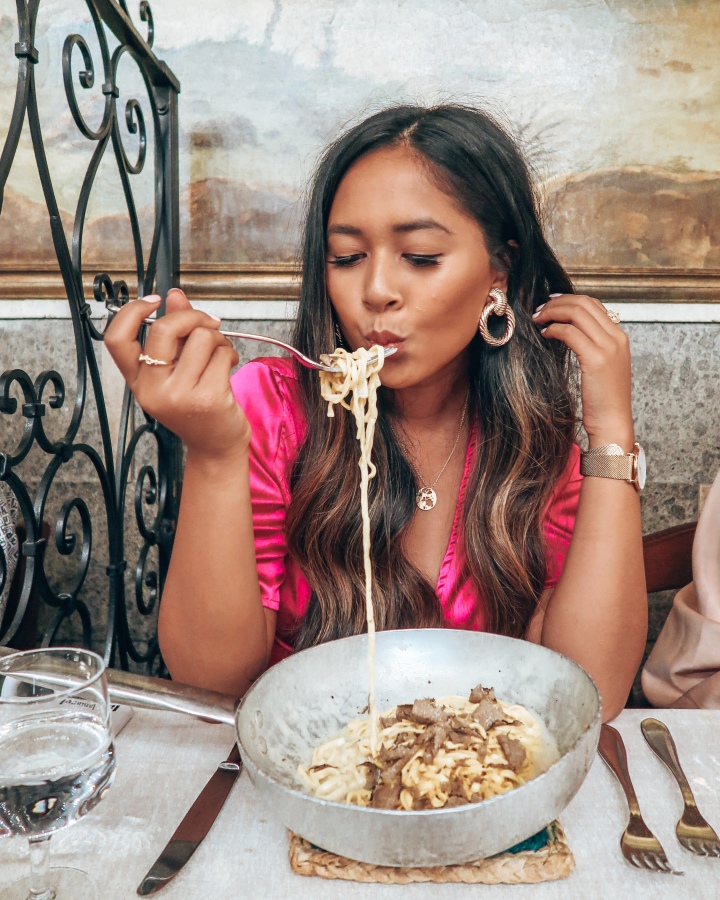 Pasta in pans is worth a queue but this pasta was just (and I don’t want to sound dramatic) but life changing. I thought truffle pasta had first place in my heart but I think it may have been stolen by the Bombolotti (mezze maniche) alla Norcina. Made with heavy cream, Norcia sausages, Parmigiano, Pecorino, black pepper and a pinch of nutmeg, you’ll truly regret not trying this when in Rome. 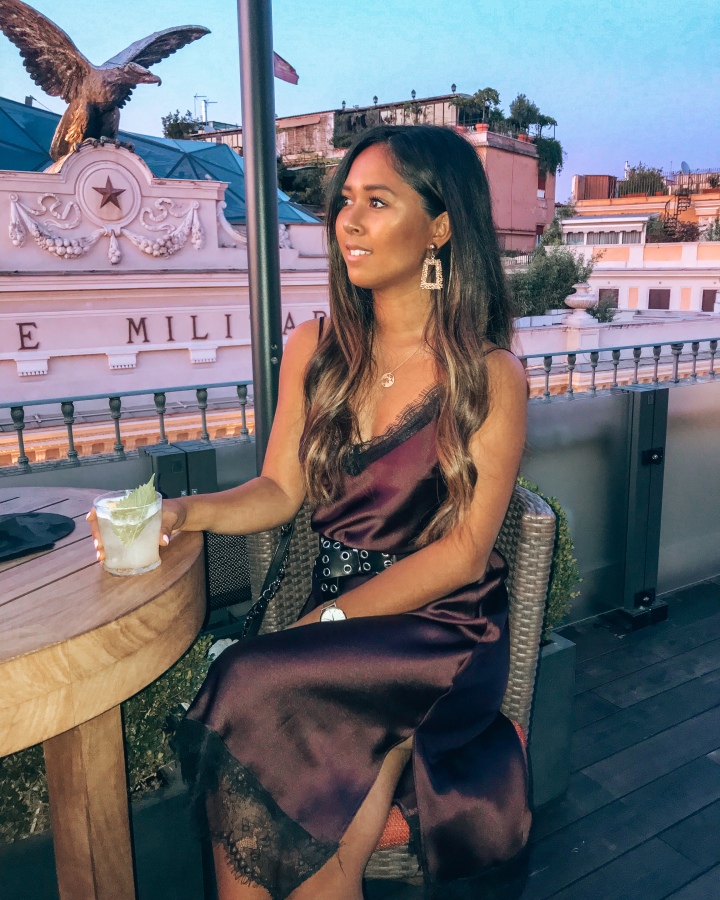 If you fancy a fancy night out in your fave little dress and heels a maybe a one meal break from pizza and pasta, I can’t recommend Zuma enough. Sometimes in life, things don’t go to plan (tried to go to Hotel Raphael but they were fully booked) so you end up heading to an alternative rooftop near by for drinks and then you end up booking a table and having some truly fantastic sushi. No regrets here, this place is a vibe and I would definitely go back.

Other restaurants that were top of my list but sadly we couldn’t visit as they were fully booked:

Osteria Barberini –  truffle restaurant. You must book a table for this place as we couldn’t get one the whole 3 days we were there.

Tonarello – Trastevere. Expect a VERY long queue at lunch unless you go for opening. I wanted a pasta pans photo here as it was a recommendation but the line was like an ASDA Black Friday sale. Not. For. Me. I recommend going later in the afternoon when the initial lunch time buzz has gone because I’ve heard its pretty banging.

Hotel Raphael – Google Rome Rooftops and this hotel will come up. Make sure you book for drinks as they get really busy. Should you want to stay for dinner, the menu is vegan/vegetarian fine dining.

View my map of Rome below:

One thought on “Eating in Rome”