Where to find them:

Indian Accent has won much critical acclaim since opening just a few months ago and with the arrival of brunch alongside a whole host of new menusFollowing in the footsteps of the wildly successful brunch menu at its sister restaurant in NYC,  relaxed Indian-style brunch dishes feature the likes of Parsi fried eggs with crispy potatoes and chutney; chilli crab cheese toast with summer cucumber pickle and tamarind ketchup; and quail egg pulao with bacon, crispy shallots and mint yoghurt.  Set to be a sure fire favourite is the chicken chilli dabba gosht with baked eggs– a quirky, Indian-inspired take on shakshuka, served with paratha. Indian Accent offers an inventive approach to Indian cuisine.

We opted for the “brunch for the table menu” priced at £40pp to get an idea of the best bits.

Sounds confusing but the visuals below will give you a better idea of what each dish looks like.

Being based in Mayfair, you can expect the prices to be a bit steeper than your every day brunch but we were truly taken on a flavour journey during our brunch. We had an appetiser of blue cheese naan and pumpkin & coconut short with a gala masala which was a warm soup you would sip on the side – this isn’t on the menu but just a little welcome form the kitchen.

The first dishes to come out were the pea bhel, burrata and chilli crab cheese toast. It’s recommended that you smash up and mix the pea bhel to enjoy all the different flavours at once – so we did. This dish is perfect and light and definitely more of a traditional dish with a slight kick. The burrata which is not typically Indian had a glorious chutney on top and teamed with the crackers on the side made it a great sharing starter and boy do I love burrata, this one was creamy not smokey. My favourite was probably the crab toast and luckily for me my brunch partner doesn’t like cheese or seafood so I ate the whole thing. This definitely has a strong and spicy kick to it which builds with every bite so have the water ready but it’s definitely that moreish kind of spice that keeps you going back.

Next up was the Parsi, salmon and chicken chilli with a selection of kulchas. I must admit I was already quite full before the mains even came but alas we persevered. I found the salmon slightly too fishy for my mood that particular day but it was very flakey which I liked. The Parsi which is a friend egg on crispy potatoes and chutney was a very clever and well interpreted brunch dish by the Chef and another dish which is great to mix altogether. The chicken chilli which comes in a large metal pot was truly delicious and again had a little kick as expected and one you broke the yolk and mixed it in it really made the dish more enjoyable. My favourite bit and this will be no shock to anyone who really knows me was the truffle kulcha which is like a stuffed naan – this was dreamy because can you really have too much truffle? They pride themselves on quality and also presentation with care taken into preparing every dish to be just as pleasing for the eye as it is for the tastebuds. I also loved how they mixed Indian flavours with traditionally more western dishes and flavours.

We were absolutely stuffed at this point but couldn’t leave until we tried the dessert.The Makhan Malai has actually won awards in New York City for the best dessert so how could we say no. It was like nothing you would’ve tasted before and although impressive in size, the dish really did just melt in your mouth almost like a cross between a mousse and a custard with the crunch of the almonds and a good use of saffron in a dessert. The other dish was a fruity dish which was light and had hints of ginger.

Overall, I would definitely go back to Indian Accent. The price tag is quite steep so I would pick this for a special occasion but the location and service is absolutely top notch and they do some great cocktails too! 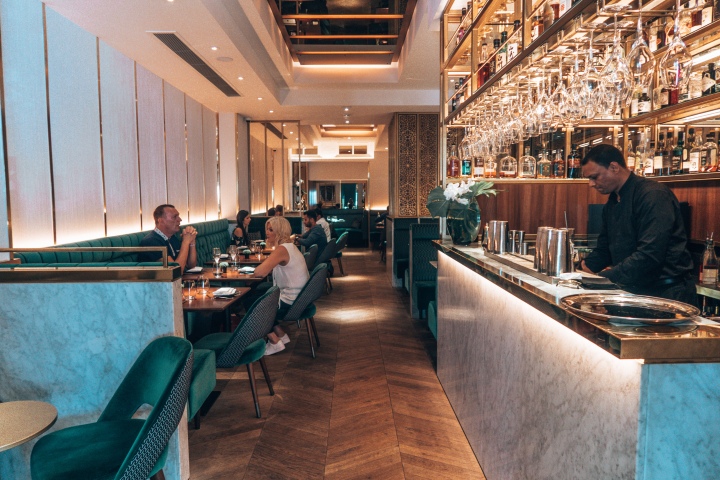